Improved organizational structure of Collegian’s editorial division by implementing independent staffs for social media (which grew Twitter followers from about 7,000 to more than 20,000) and multimedia; combined news and sports copy desks into a single hub

Budgeted the paper daily and assisted with page one design

Served as a member of the Collegian, Inc. Board of Directors

Worked at least 60 hours per week at the Collegian, in addition to being a full-time student; read my senior column here

Investigated trends among minorities and the Penn State administration, including tuition, budgetary concerns and lawsuits against the university; covered Penn State Board of Trustees and Faculty Senate meetings

During my year as editor in chief, the student-run newspaper received these awards and recognition:

In the year that the Jerry Sandusky child sex abuse scandal erupted at Penn State University and legendary football coach Joe Paterno died, I was the editor in chief of the independent student-run daily newspaper, The Daily Collegian, overseeing a staff of about 175 editors, reporters, photojournalists and designers.

My rule was simple: The Daily Collegian had to provide consistent, accurate and dogged coverage for our core audience: students.

Meanwhile, people from across the nation turned to the Collegian for updates. The Collegian flew off newspaper stands; even a special edition that came out on a Sunday. A student painted an entire gallery of Collegian-inspired works, at right. Print was relevant.

At the end of the fall semester, I wrote about the experience for the Collegian Alumni Interest Group. After graduating, I penned a column on what the campus was like as the scandal erupted.

Here are a few of the papers we produced that year.

We presented a weekend’s worth of headlines in a nontraditional layout for Monday’s front page after were filed against former assistant football coach Jerry Sandusky.

I stopped the presses before we redesigned this front page following the late-night Board of Trustees meeting and riots on campus.

After Penn State football coach Joe Paterno was fired, President Graham Spanier resigned, and students took to the streets rioting, it became clear our standard opinion page wasn’t going to cut it. So around 1 a.m., pushing our press deadline, I erased the entire page and reinvented our opinion page.

This edition also contained a commemorative edition for football coach Joe Paterno who announced his long-awaited retirement, only to be fired by Penn State’s trustees hours later. 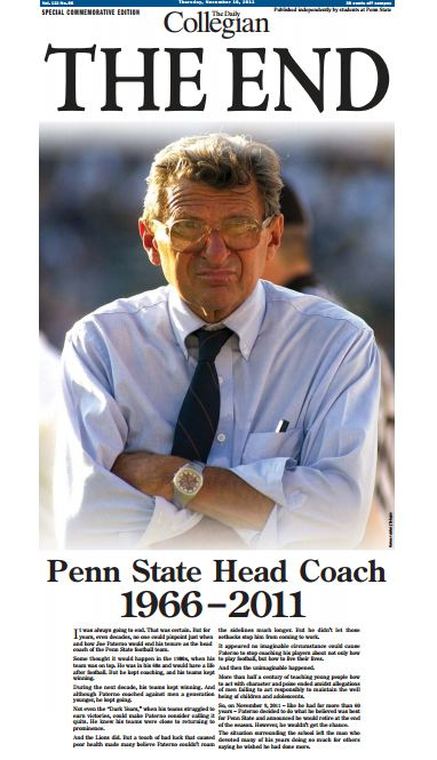 For the second time in the Collegian’s 125-year run, we printed a Sunday edition, covering a student vigil, the Board of Trustees meeting and the first Penn State football game that Joe Paterno hadn’t coached in some six decades.

Simply put, we didn’t think the news could wait until our Monday edition hit stands.

On Monday, Jan. 23, we covered the death of Joe Paterno. Poynter took note.

What I’m talking about